WHY SWIM WITH FINS?

Although swimming is considered one of the best aerobic or cardiovascular-conditioning exercises, many people forget to use their legs where the largest muscles are located. Since the greatest cardiovascular benefits come from including the highest percentage of the body’s muscles – that’s why cross-country skiing and rowing are considered two of the most demanding sports – it makes sense that swimmers who activate the large muscle mass of the legs by kicking will benefit from a more demanding workout that burns more calories and increases fitness levels.

Add fins to the equation and the increased load they add to the legs means that as long as exertion levels remain high, the cardiovascular system gets an even more intense workout with even greater fitness benefits.

Unlike all other fins, even those with open toe drains, only Force Fin swimming fins are designed to concentrate the force of the blade further back on the foot, using the muscles of the whole leg, not just the lower leg.

Good swimmers, on the other hand, can hyper-extend (plantar flex) their ankles, pointing their toes so that the top of the foot forms a straight line with the shin. Because of the extra load from the increased surface area that fins provide, swimming or kicking with fins forces ankle extension during the power phase (pushing down when swimming freestyle) of the kick. Repeated fin use eventually stretches the ankles, increasing their flexibility for moving in all directions and helping the kick become more propulsive and efficient.

Kicking with fins is like lifting weights: the added resistance of the water on the blade of the fin increases the workload on your leg muscles. Your body adapts by increasing the strength and endurance of the muscles involved. Stronger muscles move more water making you swim faster, all other things being equal.

Improve body position and technique so you can swim fast

Fins add extra propulsion to the stroke, which increases a swimmer’s speed through the water. Good swimmers tend to plane on top of the water while poor swimmers tend to drag their legs and swim in a more vertical position slowing them down. One of the goals of swimming faster with fins is to swim faster when the fins are taken off! By transferring the feeling of swimming faster and higher with fins to swimming without them, a swimmer makes use of a phenomenon know as neuromuscular patterning. The muscles and the nerves can actually remember the feeling of swimming faster and will try to duplicate the pattern the next time out. The more times the pattern is repeated (swimming faster and higher in the water with fins), the easier it is to duplicate it. The end result: the swimmer’s technique and neuromuscular coordination improves. 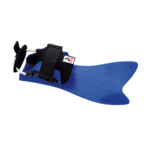 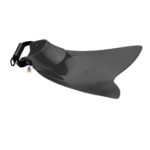 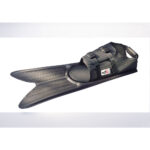