We won an International design award sponsored by Stevens Urethane, Massachusetts (acquired by SWM International) for our patented manufacturing process. Sheet urethane is an exoskeleton in to which our custom cast polyurethane was pumped to fill out the fin structure and form. The Fab Force Line of fins were made without molds, as their outer skin layer of the fin is the mold. Add a recycled tire sole plate. 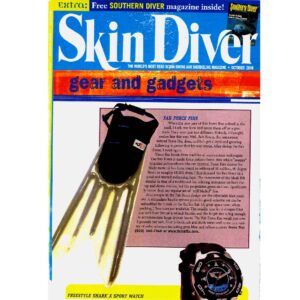 When the new pair of Fab Force fins arrived in the mail, took one look and wrote them off as a gimmick. They were just too different. Nobody, I thought. makes fins this way. Well, Bob Evans, the brainstrust behind Force Fin, does, and he's got a loyal and growing following to prove that his way works. After diving the Fab Force, I must agree. These fins break from traditional construction techniques. The Fab Force is made from polyurethane into which "snappy" rounded polyurethane ribs are injected. Force Fin claims the blade material has been tested to withstand 10 million, 90 degree flexes or roughly 15,000 dives. I first donned the Fab Force in a pool and started swimming laps. The movement of the blade felt similar to that of a traditional fin, offering resistance on both the up and down strokes, but the propulsion generated was sigmficantly better than my regular set of "stiff bladed" fins. Also unique in the Fab Force design are the adjustable foot pockets. A redundant buckle system provides good security, yet can be unbuckled for travel, so the fin lies flat. (A great space saver when packing) Two sizes are available. The smaller size fin is designed for use with bare feet or a wetsuit bootie, and the larger size is big enough to accommodate large drysuit boots. The Fab Force Fins weigh just over 3 pounds per pair, float in both salt and fresh water and come in a variety of color schemes including grey, blue and yellow accents. Force Fin: (800) 346-7946 or www.forcefin.com. - Skin Diver Magazine OCTOBER 2000

We found 15 pairs of proof of concept SD-1 Scuba Fins. That’s all we have. These were part of a lot made for US Military divers Research, Development, Testing and Evaluation (RDT&E). Production models were modified only to remove the velcro from the strap system and coveted by members of Special Forces around the world. Very light weight 3.5 pounds and packs flat.  Adjustable balistic foot pocket, which fits foot sizes 9-12.  One added benefit is they float and hold leg in a neutral position when at rest.

There are no reviews yet.